I didn’t realize I missed the whole month of April for this blog as time just seems to be rushing by! Since getting back to the farm after the One of a Kind show in , I’ve been slowly plodding along with my various tasks and haven’t really been stressing too much over the timing of things. I may regret that…but I also think that I just have to do what needs doing and not stress too much over what’s not done yet, or I’ll just be paralyzed by the long list of things that still need to be done.

Julia came back with me to the farm after the show, and while she was here, helped me with unpacking and organizing around the house, as well as pulling down the interior plaster and lathe walls in one corner of the eventual large guest room. My original thoughts were to pull down all the walls and possibly the ceiling, insulate and put up drywall, but after determining that I wouldn’t end up changing the shape of the room or ceiling at all given the structural studs and beams, I decided to fix just that one corner (where the walls had been in rough shape already) and just paint the rest. It’s amazing to me how much work it was to make those plaster and lathe walls in the first place, and certainly a lot of garbage would have to be dumped if I pulled them and the ceiling all down. It’s also really interesting to see how wide some of the boards on the house are, now that I can see them from removing the interior walls. For long term insulation improvement, I’m better off taking down the siding on the house and insulating the exterior under the siding. Much more efficient and less garbage created! 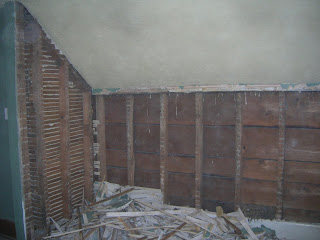 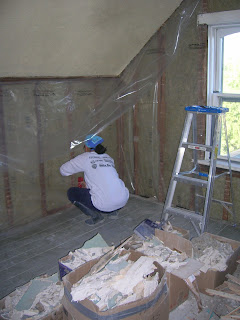 My family came up for Easter dinner and helped do some raking and brush clearing around the yard. The following week, I also pulled up a lot of carpet that had been laid down on the grounds around the house (who carpets the outdoors???) so now the layers of organic material that have been kept from the soil by that carpet layer can finally incorporate back into the ground. There’s still plenty more carpet to pull up around the property. It’s amazing to me that people could have such a hatred of weeds and have chosen to lay down so much carpet to combat them. I also had a set of visitors from my church come up the last weekend of April though it was too rainy outside for them to help me with any yard work. So we watched movies and ate snacks instead 🙂 They did take tons of pictures of the grounds and house so I look forward to seeing those.

Sarah and her documentary crew were up for a few days as well to film the overseeding of the pasture fields and get a general update on what’s been going on at the farm. While they were here, a local farmer also came to visit and examine the possibility of growing grain on some of my fields. He decided against doing so due to the small size of the field (he manages hundreds of acres in the are, growing near-organic grains). I was so distracted by all this company, that I stupidly left a pot of soup on the stove that turned to charcoal and filled the house with smoke. That may have been a blessing in disguise as I think the fumigation helped to clear some of the lingering odor of cat from the house ;P Unfortunately, I destroyed my favourite pot in the process 🙁 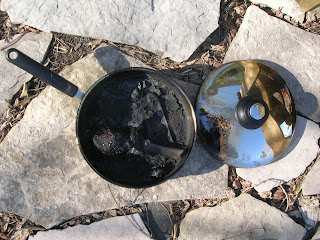 My poor destroyed pot…yes, that is a ham bone in there

Robb moved up to the farm at the end of April, and has been helping a lot with cleaning and organizing the grounds, barn, drive shed and house. We pulled the black plastic and tires off the barn floor where the walls had come down a few years back so that the floor boards, joists and beams in the lower part of the barn can dry out and hopefully stop rotting. I’m going to have to get my Amish contractor to take a look and see what needs to be done to make the lower barn watertight and structurally sound and possibly turn the upper part of the structure into a barn-top terrace. There’s a great view of the farm from there and it would be a wonderful future site for an outdoor café!

My contractor will be starting on re-roofing the house in dark green barn steel this coming Monday. Unfortunately for me, the price of steel went up $0.40/square foot in the past few weeks so the materials for the roof are going to cost $1500 more than originally expected. And when I brought my minivan in for new all-season tires (the previous ones were completely bare), it turned out that I needed new brake calipers (hadn’t been changed since the van was bought in 1997) and pads. Safety first of course, but from a $400 tire change and checkup, it was a bit of a blow to have the final bill come to $900 🙁 Apparently, the rest of the van’s in great shape though so hopefully no more needs to be spent on maintenance this year (knock on wood!). If only I could live like my Amish neighbours and not use a motorized vehicle at all… My Amish across the road neighbour made a custom free-standing kitchen cabinet for me which now holds the old island countertop from Mark’s parents’ place, so now I have a great surface for baking and cabinets to store my mixer, food processor and other baking supplies. Unfortunately for me, he’s in the process of selling his farm to move to the I’ll be sad to see such a good neighbour go!

Planting related things that have been done so far…I sent my eggplant, pepper and hot pepper seeds off to be planted and grown in the greenhouse of a farmer down in Lucknow (who’s growing 480 seedlings for me as her pass-on of the Heifer International (www.heifer.org) gift she received as part of the Farmers Growing Farmers program last year). I’ve started all my tomato, leek, tomatillo and ground cherry seedlings with my new soil block making tools. Robb helped me pull up the sod around 50 feet of the horse corral, where I’ve now planted my first planting of sugar snap peas (taking advantage of the existing fencing for trellising!); the remaining hundred feet of circumference will be used for two more pea plantings, and the interior of the circle will hopefully become a permanent herb garden. I’ve had my neighbour in to plough up and cultivate my 1+ acre vegetable field, as well as agreed to have the previously cultivated 5 acres in the lower field put into grains (rye and barley that he will bale green as silage) underseeded with red clover for this year. I’ve also overseeded Dutch white clover (with a hand cranked broadcast seeder) into about 10 acres of hilly hay fields which will be used for animal pasturing in the long term, and have walked the perimeters of the various fields with a fencing expert to plan out long-term animal fencing. I now have a plan for where 3 rotated vegetable plots will be in the years to come, as well as the permanent pasture/hay fields. 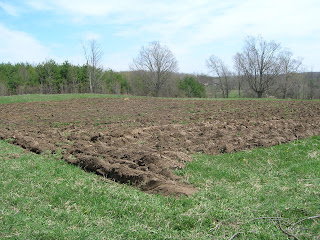 Vegetable field after initial ploughing to turn up the sod

For animals, I’ve purchased moveable electric fencing equipment and have visited various sheep and goat farms looking for lambs and kids to bring to the farm to pasture in the next few weeks. I’ve mostly cleared out the bottom of the barn in preparation for housing the sheep and goats overnight, though I will also make a straw bale and plywood shelter for shade and rain in their rotating pastures in case it’s too much of a hassle to get them into the barn each night. I still need to nail up some boards to pen them into a smaller part of the barn instead of having them run amuck in the horse stalls and other areas. Robb has cleaned out a large shed behind the drive shed which will be used for housing laying hens once we’ve repaired theholes in the chicken wire around the shed.

On the marketing front, I’ve visited the Keady market which is a mere 10 minute drive north on Grey Road 3 from me. It’s a giant Tuesday market which grew up around the weekly livestock auction held there and attracts a large crowd of locals and cottagers. I will be booking a reserved spot at that market, though I have precious little to sell at my booth at this point in time. The market started this past Tuesday, May 5, and runs until September 29. I will see what I can scrounge up to sell (vine wreaths made by Robb, tea shortbread cookies that I’ll bake, some of Benita’s clutches and brooches, etc.) starting this coming Tuesday, May 12. As my seedlings get big enough, I’ll bring the extras to market to sell as well until I have actual vegetables to bring in. I’ve also come up with a logo with Benita’s help and will make signs for both the market and the farm, and eventually a flag to fly from the market booth so that people can find it easily. I still need to pick which Saturday market to go to and am currently inclined to heading out towards Port Elgin because it’s a relatively multi-cultural community that’s grown up there because of the workers at Bruce Power. My local community is very white, so I’m looking forward to seeing some different ethnic groups once a week at least!

What still needs to be done…a further tractor cultivation by my neighbour of the vegetable field before I plant my first direct seeded beds of salad greens, spinach, beets, radish, fennel, kohlrabi, beans, Asian greens, spring onions, carrots, parsnips and annual herbs, hopefully this coming week. I still need to start all my winter and summer squash, pumpkin, cucumber, kale, chard and cabbage seedlings. And I need to stop debating brands and just buy a rototiller and an Earthway seeder. I should have ordered them weeks ago as I will likely be doing my first plantings with just a hoe, rake and hand seeding. I’m sure farmers everywhere would cringe at the inefficiency and I’m a bit mortified myself as Everdale certainly taught me better!

Hopefully I’ll have the new drywall back up in the guest room after tomorrow while my brother-in-law’s here to help me so that I’ll have a great place to host guests in the weeks to come. My farm warming date has been moved to Sunday, June 28, which works better for some of the people that will be helping prepare the food for the event, and is also a better time for people to see the farm as the majority of the vegetable crops will be in the fields and the animals should all be here by then.

Well, this has certainly been a long post, though I’d never be described as a person of few words ;P I’ll try to post more often so they’ll be shorter in the future! 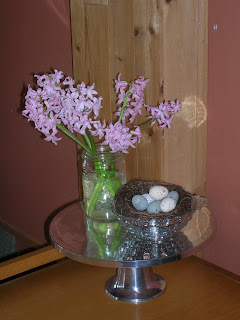 A spring vignette, with hyacinths from the farm