Last week, animals came to the farm. First, I bought a set of 4 bantam chickens at the Keady livestock auction. For the past couple markets, I had tried bidding on some hen and chick sets and had lost as I wasn’t willing to bid past my cut off amount. But last week, I got lucky and managed to win the auction for a bantam rooster and 3 young hens for $5 each. It remains to be seen whether these hens will start laying or how long that will take since I don’t actually know how old they are, but the great thing about bantam chickens is that they forage for themselves so they’re about as easy care an animal as I could get! When I brought them home, I opened up their box in the chicken yard so they could get used to their new surroundings. Little did I expect them to fly away on me! They’re definitely a lot more flight worthy than your average laying breeds! Robb helped me catch the chickens and put them into the animal shed where I left them with some organic layer grain mix and water. My hope was that they would spend some time there and get used to it being their home. I then went on the internet to see how many days I’d have to keep them in there for them to feel like it was home. But after some web surfing, I realized there’s no hard and fast rule, so I decided to take the plunge and let them back into the open after just one overnight roost in the animal shed. I figured that I could track them down to wherever else they might roost and bring them back to the shed if they didn’t come back on their own. But luck was on my side as they came back to the shed on their own that night to roost, and have been coming back faithfully each night since then 🙂 I hope when I get some regular laying hens to add to the flock that they’ll get accustomed to their new home just as easily. I just hope the bantams don’t take off when the other hens arrive! 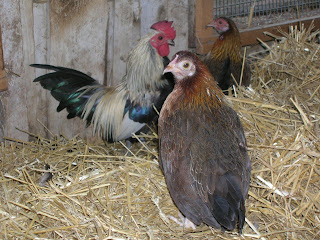 The bantam rooster and 2 of his hens in the animal shed. 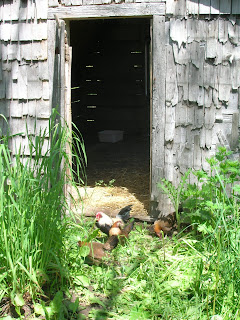 The whole flock, just outside the animal shed after I took the plunge and let them out.

A couple days later, I went to an Amish farm around the corner from me and bought their cull billy goat kids from them. As a dairy goat operation, the male kids that are born aren’t particularly important to them, so once they’re weaned, they’re available to whoever is willing to buy them. When I went by to buy the goats, they had an older kid and 2 really little ones available. I knew they weren’t the healthiest animals in the world, but since I’m not setting myself up for a goat breeding operation right now, I figured this was a low risk way for me to start caring for animals that will become meat in the fall. I also felt that no matter if they got better or not, at least they’d be in the sun and on pasture on my farm for however long they lived, instead of in stuck in a stall in a barn. The littlest brown goat had all sorts of crustiness around his eyes and nose, which I wiped off with a salt water solution. The little kid didn’t try to run away from me while I was doing this, which encouraged me. When I first brought them back, I put them on leads so they could graze in the open…but they soon got themselves hopelessly tangled up with each other, so they were put into the small yard around the animal shed that I keep the chickens in at night. They definitely liked being off leads and browsing around that small yard much better. And the chickens didn’t seem to mind them being there. That first night, I made sure they all went into the shed at night so I could close them in and keep them safe from any predators. The goats all piled on top of each other in a corner, and the chickens roosted on a rafter above. 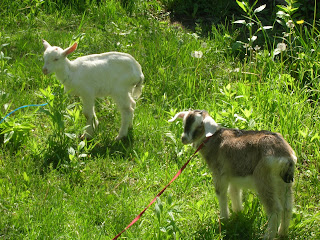 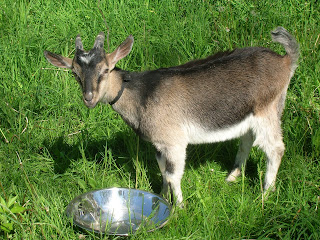 The biggest of the kids. According to the farmer’s wife, they missed this one when the last batch of billy goat kids were sold. I suspect he spent more time feeding from his mother than the other 2 did.

As the white goat had looked really unsteady since he arrived on the farm, I was concerned that he wouldn’t make it through the night. Every time he would get knocked over by one of the other goats, he just couldn’t seem to get himself back up again. But by the end of that first day, he seemed to be able to get back up on his own and so I just hoped for the best. He did make it through the first night, and spent the next day in the yard with the other kids and chickens, but continued to look really wobbly and stiff on his legs.

The second morning, I went to let the animals out of the shed and the little white goat was lying on his side, reflexively suckling with his mouth. I went to lift him up to see if he had any strength to stand, but he was clearly too weak. When I put his nose by the water, he didn’t try to lap it up at all. I brought him outside to lay in a patch of sunshine and went into the house to warm up some sugar milk for him to see if he would drink that. I was in the house for about 5 minutes and when I came back, he was dead. I suspect he had white muscle disease, a nutrient deficiency from lack of selenium and vitamin E, nutrients which goats should get when foraging on pasture. I think he was already too far gone for 24 hours browsing outside to help him much. Or he may have been too starved from being weaned off milk too early for browsing to provide him with enough nutrition as his stomach may not have been ready yet for non-milk food. Robb and I had tried to feed him some milk and oatmeal a few times that first day, but he wouldn’t touch it. And he also wouldn’t touch any kibble we tried to feed him, though the bigger goat certainly gobbled it up, and the little brown goat nibbled at it too. I think if I had gone to the Amish farm to buy goats even a day or so later than I did, the little white goat would already have been gone. I’m just glad that at least he had a full day or so to spend browsing on grass in the sun before he died. I still feel worried each morning when I shut the animals into the shed at night that maybe one of them won’t make it through the night. It’s been almost a week now, so maybe I should stop worrying, but I’m sad that the little white goat didn’t make it. I’m just going to have to get used to what all experienced farmers know, when you have livestock, you’ll also have dead stock at some point.

The animals definitely all have distinct personalities. The rooster keeps his hens close to him and is quite cautious, but they do wander outside the yard and seem to find me when I’m working at various parts of the yard around the house. Robb has suggested that his name be Solomon. I have no names for the hens yet as I really can’t tell them apart. The bigger goat’s been named Monty as he seems to be a bit of a troublemaker, which is generally the nature of goats. I named the little brown goat Merlin, partly because Robb had started to call the little white goat Arthur for whatever reason, and also because Merlin has 2 whiskery wattles under his chin. Merlin’s a bit of a cry baby as he often bleats at me when I’m around so that I’ll pet him. That’s probably the result of me washing his face so diligently the first day he arrived. I just have to remember not to pet either of them on the head to discourage butting in the future. So I stick to petting them on their sides and necks.

On Sunday, as they seemed to finally have eaten most of what was in their little yard (yay, no need for me to mow!), I set up the portable electric fencing to enclose a larger area for them outside of the little yard around the animal shed. When they’ve eaten down most of that area, I’ll move the fence to another portion of the yard. There’s definitely no lack of rotating forage for them, even just around the house! Once I also have lambs, rotating them around the house yard and into the fields should mean I won’t have to do any yard mowing any more 🙂

3 thoughts on “Animals now at the farm!”