Monty is like a stereotypical rock star. He’s demanding, pissy and randy. He’s picky about his food, always wanting what’s just out of reach, even if it’s the same as what’s in front of him, and is very vocal when he’s in any sort of trouble, usually when he has shortened his leash because he’s walked around the same tree many times. He exudes attitude.

He’s also a very handsome goat, with lovely colouring on his front legs, a tuft of white and black hair in front of his horns, a bristly mohawk along his spine, and a little goatee under his chin. He’s quite solid muscle and seems fairly athletic, jumping around on large rocks and standing straight up on his hind legs to reach leaves on branches of trees to eat. When he’s chilling in the shade while chewing his cud, he’s quite endearing. 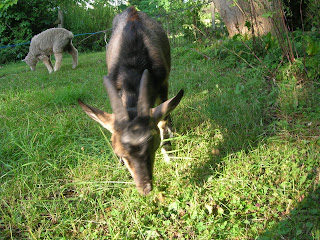 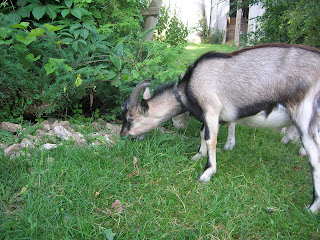 However, he’s not nearly so cute when he’s feeling buckish. Then he chases the lambs for some action, which they manage to escape by scampering away from him. I’ve chosen not to castrate any of them since they won’t live long enough to become a real nuisance (or so I think) since they’ll be sent for slaughter in November. Mostly, I think it might be a bad habit for me to consider castrating any males that start to get annoying ;P

I am debating taking a rasp to file down the tips of Monty’s horns so they’ll be less sharp and won’t accidentally hurt the other animals, or me! I’ve already got a knee cap contusion from when he shook his head near me the other day. His horns aren’t just pointy on the ends, they’re also more triangular than rounded, which makes for lots of sharp edges!

Since I’ve only got male ruminants this year, being raised for meat, I wonder how different the animal raising experience will be when the herd is mostly female, with any male lambs or kids born that season castrated via elastator soon after birth. Right now, Monty and the lambs are quite social with me and allow me to walk them all around the farm on leashes to bring them to fresh grazing each day. From my limited experience, male lambs seem to be more friendly and less skittish than the females, so in the future, I probably shouldn’t expect such dog-like behaviour!