I haven’t been writing all that much about the vegetable field so far this season…because it has definitely not been growing as I would have liked. The field is severely lacking in organic matter, which is no real surprise since all that’s been happening on this land for years has been the harvesting of hay, which is the constant removal of organic matter, with nothing done to replenish it. Between the lack of field fertility, and the worst weather for growing vegetables that we’ve had in years, I really shouldn’t be so disappointed that all my crops haven’t produced. But I guess I was hoping for some beginner’s luck, and maybe a miracle or two ;P

My first plantings of spring mix and spinach have barely grown at all. And with the failure of these crops after a couple attempts, I decided it wasn’t worth it to continue with my planned succession plantings because the soil clearly didn’t have enough fertility to grow lettuces and spinach at anything like a normal rate. My first planting of beans was completely eaten up by an insect, likely the Japanese beetle, and my beets have taken a while to really get going. My first planting of carrots barely germinated, and the parsnips didn’t germinate at all. Essentially, most of what I direct seeded into the field didn’t germinate or grow as expected. So I’ve really been playing the waiting game this summer, hoping that my transplants of tomatoes, hot peppers, peppers, eggplants, zucchinis and winter squashes would start producing. And now that we’re into mid-August, the vegetable field is finally showing signs of popping!

There are now some Cylindra beets of a harvestable size, and Kirk has managed to find some spinach to harvest from my second planting that is actually big enough to eat, and hasn’t bolted yet. My zucchinis are starting to produce (go Sunburst patty pans!), and my pak choy is getting big enough to start harvesting.

For the past 14 weeks that I’ve been diligently going to the Keady market every Tuesday, I’ve been selling my Amish neighbour’s baking, sometimes my baking (mostly vegan brownies, just to be different in a market full of butter tarts ;P), hostas from the farm, my extra tomato, hot pepper, pepper & eggplant transplants, vine wreaths that Robb made, and my sister’s clutches. Twice, I had garlic scapes to sell from garlic that has been growing back in a patch of the flower garden for probably the last 5 years (which I’ve now harvested and is curing in the barn), twice I had sugar snap peas, one week I sold baby beet greens (part of the beet thinning process), and last week, I sold spinach.

This Tuesday, for once, I’ll not only have farm produce, but more than just one vegetable! I will have Cylindra beet bunches (long and narrow beets, unlike the standard beet that others sell at the market), spinach, pak choy, patty pan yellow squashes and green zucchini! I’m so excited to be actually harvesting more than one vegetable from the field 😀

And I can’t wait until the tomatoes are ripe enough to pick. I have almost 400 tomato plants in the field, 15 different, mostly heirloom, varieties, and the plants look amazing in the field, full of ripening fruit. I almost feel afraid to write about their potential, in case I jinx the crop! So I’m definitely knocking on wood right now…even though I really shouldn’t be a superstitious person ;P Once the tomatoes start coming in strong, I’m planning a trip in to Toronto so I can sell to friends and family. So watch for the email announcing what I’ll have available soon!

The one blessing that I have to take from the lack of field fertility this year, is that I really haven’t had to do much weeding. In fact, this past week is the first week that I did any significant weeding at all since there’s been almost no weed pressure at all in the field. I’ve been much more concerned about keeping the plants in the field alive than in removing any unwanted ones! But if all goes well in years to come, this will be the first and last year where weeding is at the bottom of my farming chores ;P

I’ve also had the ‘luxury’ of easing myself into harvest mode and not having to set up any significant wash station since there hasn’t been enough to harvest to need much more than some bins and a hose. My basement has proven to be a cold enough place to keep harvested greens fresh for over a week so I haven’t had to invest in a fridge or other cooling system. My neighbour, Mike, at the Keady market, is a fruit and veg vendor who trucks in produce from the Ontario Food Terminal, and he throws out tons of plastic berry pint/half-pint trays and stacking cardboard boxes each week. So I’ve picked up enough supplies from him to reuse for harvesting and packaging that I don’t need to buy any more. My packaging purchases so far have amounted to paper bags to hold greens.

And of course, I can’t forget that I’m eating vegetables off my field too. While there may not have been enough sugar snap pea production to sell much at market, I definitely got to eat a lot (and they’re both hard to come by and expensive even in big box grocery stores!), and I’ve frozen a few pounds for the winter. I’ve also been eating lots of beet greens, some chard, and spinach, and generally, don’t need to buy many vegetables.

The season’s not over yet, and I’m a bit worried about what other curveballs the weather may throw my way. But with the bit of heat we’ve been having lately, I hope that the vegetable field is finally on its way to producing great vegetables to eat! 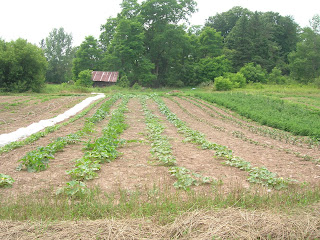 From left, under row cover, various Asian greens & turnips, a row of zucchini squashes & pumpkins, 3 rows of winter squashes, a row & a half of eggplant, then peppers, hot peppers, and the start of eight rows of tomatoes. 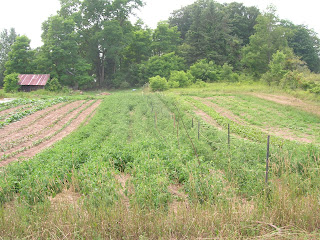 The 8 rows of tomatoes, tomatillos & groundcherries. I managed to scrounged up enough staking materials to stake 3 rows of tomatoes, and need to make/buy stakes to get another 4 staked so that the tomatoes can stay high and dry to ripen perfectly in the sun! 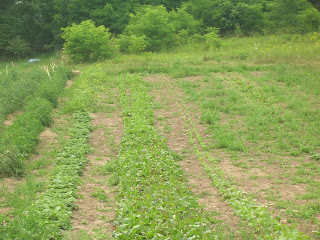 The ground hugging plant on the left is groundcherries, the next row to the right is the first planting of beets which are finally getting to be of harvestable size, and finally, the first planting of beans, which were completely eaten by a bug, but have actually grown back and are starting to flower. To the right where things start looking really weedy, is the lost parsnip bed, and the other lettuce, spinach & carrot beds that didn’t germinate or grow well. They’re not a complete loss though as I have gotten 2 bins of spinach off the field, and the chard from the spring mix has enough leaves to provide me with some salad greens to eat!

In a future blog, I’ll write about my plans for long term field fertility. If there’s anything this year has hit me over the head with, it’s that soil prep is the absolute key to successful organic vegetable production, and it’s a process that will take some years of work and care to get working at all. While I knew this factually before moving to the farm, experientially, I had only been on farms that have been in production for years and have the cycles in place to build great soil, and a it’s a completely new reality for me to be on land that hasn’t been farmed organically and needs to be rehabilitated until it can have great soil again.

3 thoughts on “My biggest harvest so far!”